After high school, Dr. Surenyan attended Los Angeles Valley College, where he studied music - piano, composition, orchestration and arranging. There, he earned an AA in Music in 1992. His studies were only to blossom from then on. Alfred continued to further his knowledge of music and all its aspects by attending California State University Northridge; he received his Bachelor of Music in Composition in 1997, and his Masters of Music in Composition in 1999. Although his focus was composition, Alfred did not stop there. He excelled in piano studies, orchestration, arranging, film scoring techniques and pedagogy.  As a student, he was co-director of a school-based composers' group - New Directions Composers' Group. He was also required to give 2 concerts, each 45 minutes in duration. He not only composed the musical material to be performed on those concerts, but he acquired the players, organized rehearsals, and conducted most of his compositions himself. 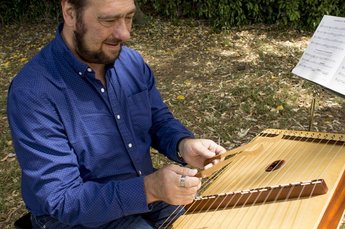 Alfred Surenyan earned his Doctor of Musical Arts Degree at Claremont Graduate University in the spring of 2009. His DMA project was on Armenian folk music. The paper is titled "A Study of Armenian Folk Music: The Fieldwork and Analysis of Komitas' Work" and an orchestral piece titled Armenian Rustic Scenes.
Dr. Surenyan has taught music for over ten years. He has taught at Jefferson Middle School in Torrance, CA as the band and choir director. He has also taught at Castlebay Lane Elementary from 2000-2002 as the General Music Teacher. Throughout the years he has taught one on one piano lessons to students of all ages. He was the Principal Librarian for the California Philharmonic Orchestra for 2 years. Dr. Surenyan was a  faculty member at the Art Institute of CA- Inland Empire  for 7 years.  He teaches one on one and group lessons for piano, music theory, composition, and music production.  He also  owns Pasha Music, operating since 1997.  He is also the Music Director and founder of the Andromeda Electric Orchestra.